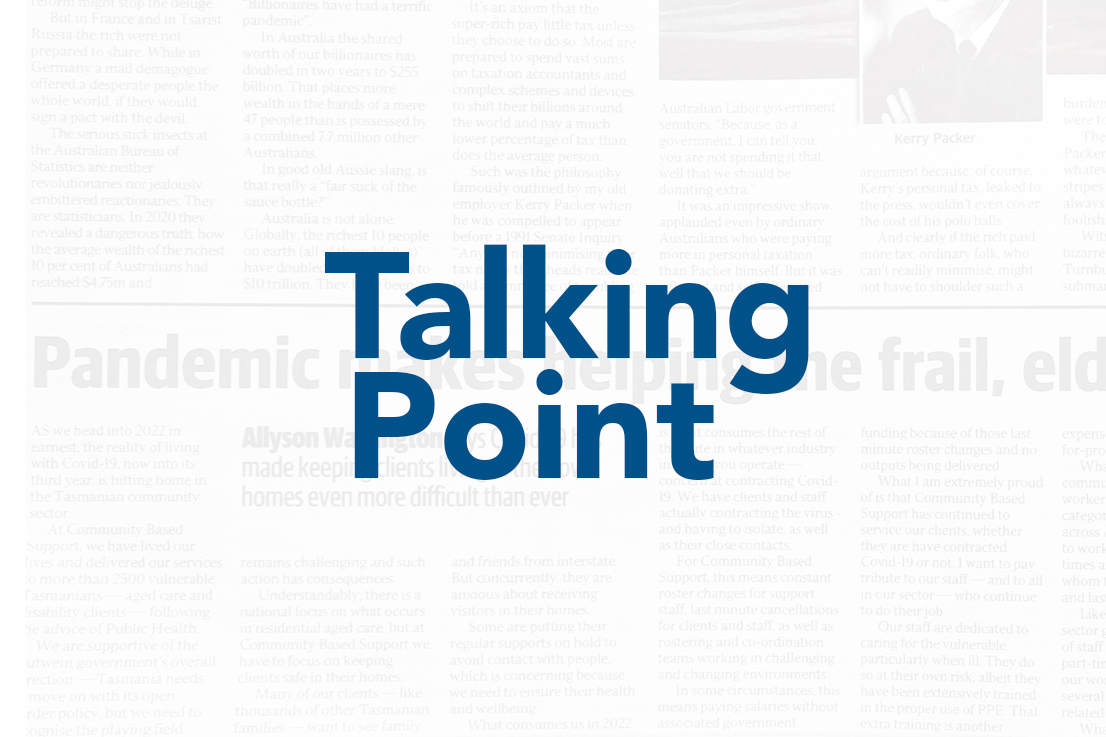 Organisations providing aged care services to Tasmanians now find themselves between a rock and a hard place after the Federal Government’s recent subsidy announcement.

At Community Based Support, we value enormously our dedicated and highly trained staff. The fact is, we could not care for the 2500 aged care and disability clients who live in their own homes without our 350 staff.

We have also been in the lucky position of being able to pay staff at above-award wages.

However, the Federal Government’s indexation figure falls way short of the requirement put onto providers. And there is still significant financial burden in place.

For example, the increase in wages will cost us approximately $200,000 each year. But the Federal funding for Community Based Support – or any other aged care organisation – has not increased accordingly.

The harsh reality is providers will now have to make decisions on where to save money to pay their workers.

Let me be very clear – every aged care worker deserves the pay increase.

For too many decades, Australia and its various levels of government have undervalued aged care workers who care for Australians, in their retirement and final years, who have given their own contribution to their communities.

However, at Community Based Support – and many other not-for-profit providers – our sole source of income is the Government.

The figures are stark.

The subsidies paid by government to providers to care for and support older Australians will increase by only 1.7 per cent during 2022-23.

The Fair Work Commission has ruled – again fairly we believe – that the modern award minimum wages are to increase by 4.6%.

There are also sweeping, and long-overdue, reforms being introduced in our sector.

Again, we agree with their introduction in the interests of quality safety and service delivery to our older Australians.

However, the additional requirements put on this from a compliance point of view will cost CBS, and other providers, both time and money.

We know all too well that the aged care industry is in crisis in both funding and workforce shortages. This was clearly identified by the Aged Care Royal Commission, a situation which has been exacerbated by the COVID-19 pandemic.

At CBS, we are concerned the aged care crisis will continue to worsen without urgent action to adequately cover the costs of care and well-deserved pay increases for our hard-working staff.  We continue to monitor and manage the situation carefully to remain financially sustainable, despite the challenges.

I am scared that some providers may close their doors and workers will lose their jobs.

I hope the Federal Government, still in its earliest days, will listen and find a solution.