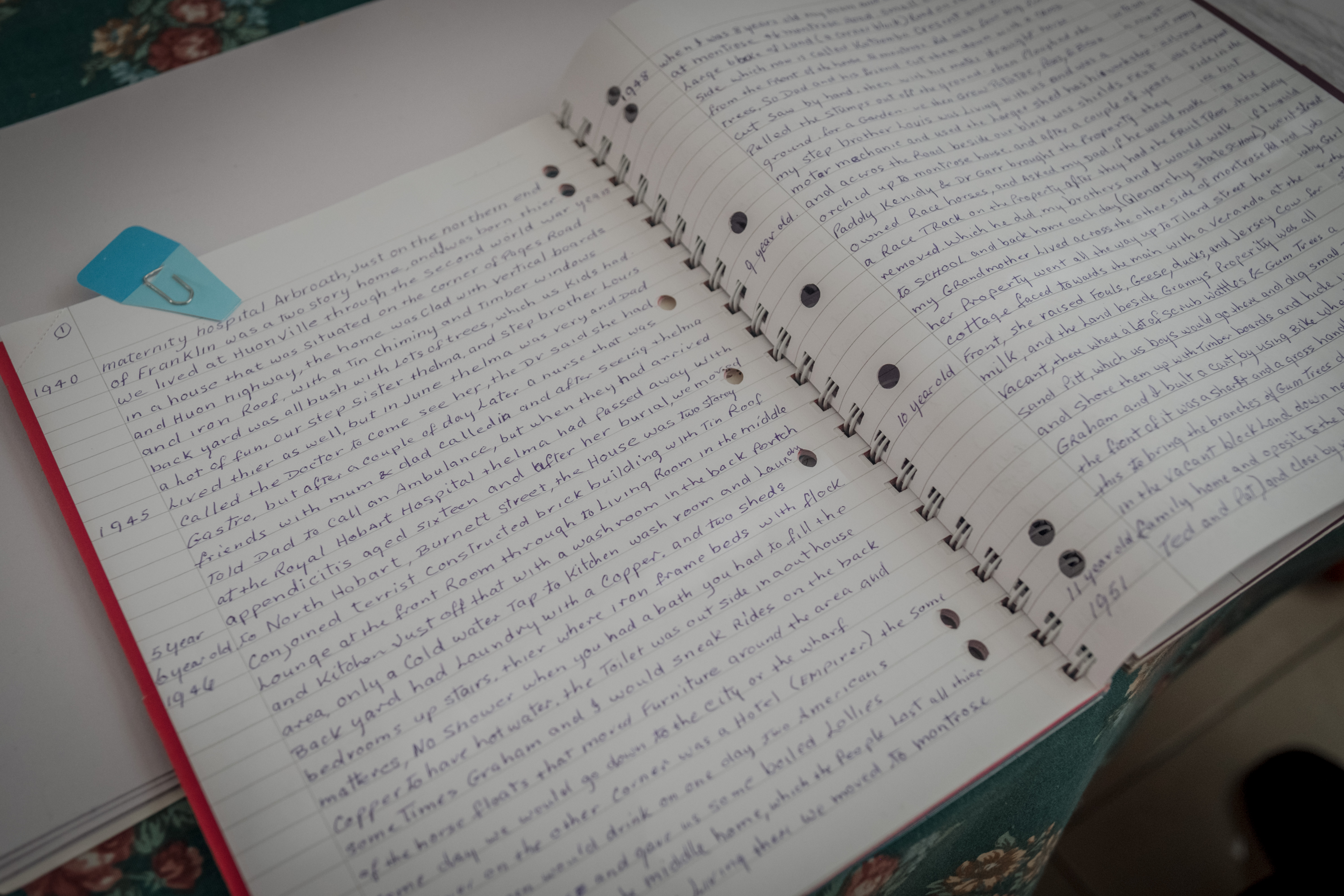 In recent months, as the world slowed down, eighty-year-old Harold Wells thought “instead of being bored I’d put pen to paper. I started by putting down where I was born and the dates and the story, my story, went from there. I wanted to know where I was and at what age and I spent a lot of time thinking and doing a bit of research.”

Harold has not yet finished his life story, but he has written about his childhood, adolescence and how as a young man he trained first as a carpenter and was later promoted to be the supervisor of housing developments. “I enjoyed every bit of my working life but when I got to 65, I thought I should give the young blokes a go.”

Harold has written about his marriage that came to an amicable end, his three beautiful daughters and five grandchildren and his cherished companion of over twenty years Pam.

Harold and Pam came to a decision early on in their relationship to live independently. “It’s been a good relationship” Harold says. “Pams kept me going. We support each other. We made it up early the way we wanted it to be and things have worked out very well.”

Harold has many health issues including diabetes, stage 4 kidney disease, asbestosis and a pacemaker. Despite these health issues, Harold believes he’s in good shape for his age, he has good mental health, and he remains mobile and active. Harold is proud of his home and garden and wants to remain living independently for as long as possible. “After being a tradesman for so long my knees are shocking. I had to get an emergency call button after getting caught out not being able to get up.”

In May 2019 Harold received a call from CBS and he has been on a low-level Home Care Package ever since. He receives general cleaning once a week, gardening once a fortnight and a spring clean every year including the windows. It’s vital for Harold’s health that he have a clean, dust free home and the extra support has made a world of difference. “The help around the house is very good” Harold says. “It takes me longer to clean the shower each morning than to have a shower!” he jokes.

“I’ve been very pleased with CBS and have had no trouble whatsoever. If I ask for help getting to the doctor, they send someone right away. Nothing is ever any trouble.”

Sarah Crosswell is Care Manager – Home Care Packages at CBS. As Harold’s Care Manager, Sarah is delighted that he has “surpassed his care goals and returned to activities that he once loved doing. His care goals today have changed, and he can now use the package to reach new milestones.”

Harold is highly complementary of Sarah saying “Sarah has been wonderful. She’s very, very pleasant and you feel at home talking to her. I can really open up to Sarah and say anything. She doesn’t miss much and is right onto it. She’s reliable and I appreciate that very much.”

Sarah has been associated with CBS for over ten years. She says “I really do find the most rewarding part of my job is clients reaching their personal goals or having positive outcomes. It’s very rewarding to be part of that process. In my opinion the most positive change in the sector over the last decade is seeing services move from being the provider advising to being consumer driven care.”

For now, Harold continues with his story. He’s quite proud of what he has achieved and says: “The story is for me and it’s for my kids and grandkids too. I’ve only shown one daughter and she thought it was very good. My hope is to get it published in some capacity.” Helping Harold get his story published is Sarah’s hope too.

To learn more about how our Home Care Packages or other aged care services can assist you, visit this page or call us on 1300 227 827.